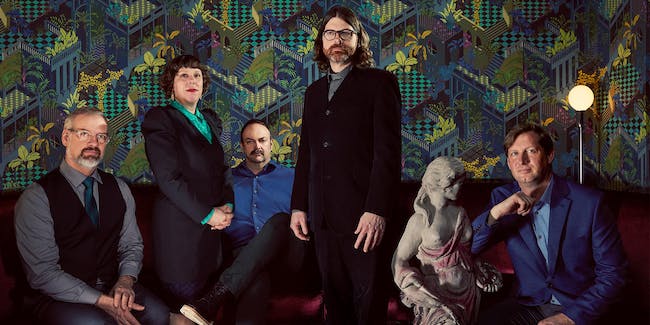 Spotify Presale: Thursday, February 13 at 10am

DSP Presale: Thursday, February 13 at 10am

The Decemberists have partnered with PLUS1 so that $1 from each ticket will be donated to non-profits that are working to transform the accessibility and infrastructure around voting policy and procedure.

For 20 years The Decemberists have been one of the most original, daring, and thrilling American rock bands. Founded in the year 2000 when singer, songwriter, and guitarist Colin Meloy moved from Montana to Portland, Oregon and met bassist Nate Query, keyboardist Jenny Conlee, and guitarist Chris Funk, The Decemberists’ distinctive brand of hyperliterate folk-rock set them apart from the start with the release of their debut EP 5 Songs in 2001. After making their full-length debut with Castaways and Cutouts in 2002, the band signed with Kill Rock Stars for the release of the acclaimed albums Her Majesty the Decemberists (2003) and Picaresque (2005), which was produced by Chris Walla. The 2004 EP The Tain –an 18-minute single-track epic – made the band’s grand creative ambitions clear.

Around this time the band’s permanent line-up fell into place with the arrival of drummer John Moen, and they made the unexpected leap to Capitol Records for their first major label album in 2006. Fans’ concerns of whether the band would alter their trademark sound quickly vanished when they delivered their most ambitious and audacious record to date in The Crane Wife, a song cycle produced by Walla and Tucker Martine (who would become a longtime creative partner) that added elements of ‘70s prog, hard rock and even quasi-disco to their palette. The album was met by wide acclaim from The New York Times, Rolling Stone, SPIN, Stereogum, and was named Best New Music by Pitchfork.

Three years later, The Hazards of Love – a full-length concept album based on Meloy’s idea for a stage musical - was a Top 20 hit. In 2011, they topped themselves yet again with their first #1 album, The King Is Dead, which featured the GRAMMY-nominated song “Down By The Water.” After their 2015 album What A Terrible World, What A Beautiful World, which included the #1 AAA radio hit “Make You Better,” The Decemberists changed up their sound and explored new approaches to making music on their eighth studio album I’ll Be Your Girl (2018) with producer John Congleton. NPR Music wrote “Every band needs to refresh and reconsider its sound sooner or later, no matter how sharp it's gotten over the course of a long career — even The Decemberists, a band whose records have always come bursting with verve... I'll Be Your Girl captures a collaborative spirit that keeps the band sounding vibrant and alive.”

Over the past 20 years The Decemberists have toured the world, performed at countless major festivals, and even founded Travelers’ Rest a festival of their own curation in Missoula, Montana. The band has appeared on The Simpsons, collaborated with Hamilton’s Lin-Manuel Miranda, and released their own crowd-funded board game Illimat.

When Fruit Bats announced its new album and signing to Merge Records late last year, singer/songwriter Eric D. Johnson did so by “Getting in a Van Again.” The 15-minute mockumentary presented a surrealist view of the music industry, while teasing the very real themes explored on Gold Past Life—Released on June 21, 2019.

“I know I said I’d be around this year, but here I am getting in a van again.”

Gold Past Life marks both an end and a beginning. It’s the end of an unintentional thematic trilogy of records that began with 2014’s EDJ (a solo record by name, but a Fruit Bats release in spirit) and hit an emotional peak with 2016’s Absolute Loser. They encompassed years of loss, displacement, and the persistent, low-level anxiety of the current political climate. They were written in the wake of friends who left these earthly confines and families that could have been.

“I wrote music to comfort myself,” says Eric D. Johnson of those times. “It was a soothing balm.”

But these salves, these songs on Gold Past Life, also represent new beginnings—the journeys that await after making it through troubled times.

In fact, the notion of getting in a van to move on—literally and metaphorically—is exactly what Gold Past Life is all about. It’s about rejecting notions of idealized nostalgia (“Gold Past Life”) and the process of grounding oneself in the present, both geographically (“A Lingering Love,” “Ocean”) and spiritually (“Drawn Away”).

That spiritual sense of place is particularly important to Johnson, who has always been fascinated by dreams and the subconscious stories they can tell. “Some of these songs are directed at specific people, some at amalgams of people, and lots at myself, or the subconscious version of myself—that version like how they say you’re every single character in your dreams,” he says. “Even the artwork represents the notion that we’re all the characters in our dreams. Here’s me looking at you: I’m a deer on a beach looking you dead in the eye and licking my lips.”

According to Johnson, “Fruit Bats has been a cult band for a long time.” With Gold Past Life, he hopes to bring more immediacy to the music and share positivity, hope, and motivation to keep on keepin’ on with a wider audience.

“Fruit Bats makes existential make-out music,” he describes with a chuckle. “But you’re also welcome to dive into it deeper if you want. Good pop music should be sublime like that.”