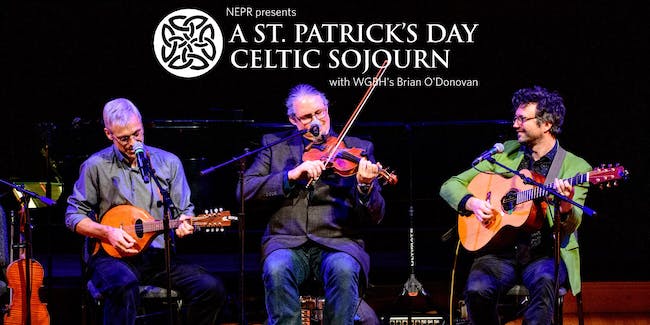 A St. Patrick’s Day Celtic Sojourn scheduled for Friday, March 13th at the Academy of Music in Northampton has been canceled. Tickets purchased with a card will be refunded automatically, all others please contact the Academy Box Office.

WGBH presents its annual A St. Patrick’s Day Celtic Sojourn with Brian O’Donovan in five venues this year with six concerts total, including a performance at Northampton’s Academy of Music for the very first time.

For over three decades, local, regional, and national broadcasts of O’Donovan’s radio program A Celtic Sojourn have proven extraordinarily popular. This concert follows the established format of the long running A Christmas Celtic Sojourn production, which played to over 14,000 people in Boston, Worcester, Rockport, and Providence just this past December.

“St. Patrick’s Day – indeed the whole month of March – is a time for many in the Irish diaspora to celebrate their own roots,” says Brian O’Donovan, producer and host for the concert series. “For many others with no ethnic connection to the country, it is a time to explore a music and dance culture that is at once sophisticated and accessible, while tracing its origins back centuries. Come join in the fun – everyone is welcome at our St. Patrick’s Day party!”

This year is sure to bring a lively, varied, and engaging concert in four of the most delightful theatres in the region. “Last year, we expanded to five shows in three venues around the region. We are so looking forward to opening – as we do for Christmas – in Rockport. And to our first time playing at Northampton’s beautiful Academy of Music. For the first time in three years, we will return to the Hanover Theatre where the Worcester audiences have always been so welcoming. And in what has become a tradition for us, we’ll end at The Cabot Theatre in Beverly in a special matinee on Sunday afternoon. Of course, we always look forward to the beautiful theatre and packed houses at stunning Sanders Theatre on Harvard University’s campus in Cambridge. I am very excited to present such wonderful Irish musical and dance connections in such terrific spaces. These theatres play host to our show so beautifully and we are looking forward to our now-annual return to each,” added O’Donovan.

Simply put, Eamon O’Leary and Jefferson Hamer are one of my favorite duos in trad music ever. Honestly. They present traditional and original folk songs with close harmonies and amazing instrumental arrangements on bouzouki, guitar, and mandolin. Bringing to mind the great recordings of legends like Paul Brady and Andy Irving, their performances are riveting and always entertaining.

“Their great feat turns out to be taking what’s best of the classic Irish folk revival without falling into any of its clichés. The resulting album bears repeated listening from start to finish, with ten beautiful, crystalline songs.” –Huffington Post

Originally from Waterville, on the beautiful Ring of Kerry, Clare grew up in a bilingual community on the edge of the Irish-Speaking (Gaeltacht) area. It was a childhood steeped in the rich tradition of Irish music, song, dance and culture. By the age of eleven, she was already turning heads at the national level of the Fleadh Cheoil (competitive Irish music and song festivals). Her mastery of the sean-nos (old-style) or Gaelic singing combined with a love of jazz and modern music has set this singer apart in a career that now is transatlantic. This will be here Celtic Sojourn performance debut.

Nathan Gourley and Laura Feddersen are two of America’s most highly regarded young players of traditional Irish music. Their playing is steeped in lifelong study of the Irish tradition and is at same time colored by their American roots. The pair have developed a unique style of twin fiddling, sometimes playing in taut unison, sometimes exploring chordal harmonies and rhythmic and melodic variations.

Really, can’t wait to have this couple and their repertoire on stage with us.

Ashley was a star for us at A Christmas Celtic Sojourn this past December. She will not only dance with us at our St. Patrick’s Day series this year, but she will be our main choreographer. Such an accomplished artist.

Born in Boston, she began training in Irish dancing at a young age with the Smith-Houlihan Irish Dance Academy, winning the World Irish Step Dancing Champion in Belfast, Ireland in 2004. At that time, she was the youngest American female ever to win the world title. Ashley went on to win two more gold world medals in 2005 and her last in 2009.

Ashley will add more dancers to the line-up to present an exciting cross section of Irish dance traditional and contemporary.

Chris is one of the best exponents of the Concertina and Button Accordion in the true Irish style. He has spent two decades surrounded by the thriving Irish music community in America. He studied Concertina with master musician Noel Hill. In 2017, he was named a Master musician by the Maine Arts Commission, receiving an Artist Fellowship. He is a talented performer with a unique style and has been featured on many recordings and stages from local dance halls to the Library of Congress.

He is also a member of the storied band known as The Press Gang and has played regularly in the past with Nathan and Laura, and music director, Keith Murphy.

Music director for A St. Patrick’s Day Celtic Sojourn since 2012, Keith Murphy is a native of Newfoundland and a founding member of Nightingale, a trio that broke new ground in its sophisticated approach to traditional music.

He is a mainstay of the Boston fiddle extravaganza Childsplay and has also worked extensively with Tony Barrand on the early twentieth century song repertoire of the Atwood family from Dover, Vermont. He also appears in concert frequently with his wife, fiddler Becky Tracy.