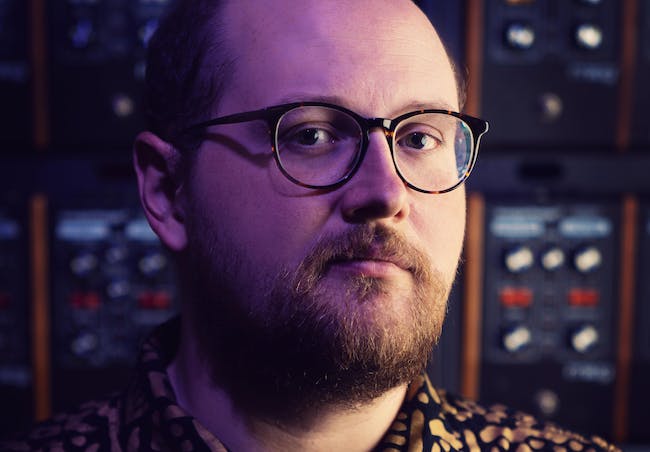 How do you make something solid, beautiful, and built to last in a time of cultural chaos and personal doubt? With Mystic Familiar, Dan Deacon gives us the stunning result of years of obsessive work, play, and self-discovery. It’s at once his most emotionally open record and his most transcendent, 11 kaleidoscopic tracks of majestic synth-pop that exponentially expand his sound with unfettered imagination and newfound vulnerability.

Since 2015’s Gliss Riffer, Deacon has branched out from his core body of work as a popular recording artist into a dizzying array of collaborative projects: scoring eight films, including the feature documentaries Rat Film and Time Trial (both released as LPs on Domino Soundtracks) and HBO’s Well Groomed; collaborating with the New York City Ballet’s resident choreographer Justin Peck on the dance piece The Times Are Racing; performing expanded arrangements of his music with the Baltimore Symphony Orchestra; and for the first time producing and co-writing an album by another artist, Ed Schrader’s Music Beat’s alt-rock dynamo Riddles.

But as varied and fulfilling as these projects were, they all lacked one thing: Deacon’s voice. And in the midst of that whirlwind of activity, he returned whenever he could to a personal oasis—the songs that would become Mystic Familiar, informed by all these collaborations but built from within. Propelled by the unprecedented response to Gliss Riffer highlight “When I Was Done Dying” and the exquisite-corpse animated video that vividly amplified that song’s narrative odyssey of multiverse-traveling post-life energy, Deacon’s writing took an exploratory new direction. He further developed this new material with daily prompts from Brian Eno’s deck of Oblique Strategies and the use of meditation to access that inner well of creativity David Lynch describes in Catching the Big Fish. These techniques, in tandem with his newly adopted therapeutic practices of self-compassion and mindfulness, produced Dan Deacon songs that go places far beyond those his music has traveled before—songs that wield the profundity of a philosopher and the absurdity of a court jester as they paint life as a psychedelic journey brimming with bliss and disruption, darkness and light.

Mystic Familiar’s opening track “Become a Mountain” immediately announces itself as something new, for the first time ever on record presenting Dan’s natural singing voice, unprocessed and with only minimal accompaniment. When Deacon proclaims “I rose up” here, it is Dan Deacon singing in the first person as Dan Deacon—a startlingly vulnerable shift in a songbook abundant with characters, metaphors, and distorted vocals. As other ornate voices answer this unadorned I, we’re introduced to the album’s central concept and titular character: the Mystic Familiar, that supernatural other being that we carry with us everywhere in our head, which only we can hear and with whom we live our lives in eternal conversation. “Hypnagogic” takes us deeper into Deacon’s mind, a synth swirl similar to those which have begun his recent performances, absorbing the pulse of the room and extending that abstract moment in which a journey begins.

From there, Mystic Familiar takes a propulsive leap with the robotic drums and soaring melodies of “Sat By a Tree,” lyrically conjuring both a campfire gathering of friends reflecting on key memories with the hard-won clarity of time ("It may only last a moment, but a moment can last a lifetime in your mind”) and a dialogue with an anthropomorphic tree that asks “What would you cast into existence if you contained the persistence to unwind?” Deacon’s personal, freeing answer comes by the song’s end, in the cathartic acts of declaring a creative work finished and sharing it with others—even while knowing “It is out of my control what this world wants there to be told of me in time.”

The four-part “Arp” suite offers a dialectic view of life and aging. Opening chapters “Arp I: Wide Eyed” and “Arp II: Float Away” envelope us in the joyful life-embrace of invincible youth—a bliss suddenly punctured by the abrupt Pharoah Sanders-esque saxophone squall of Andrew Bernstein in “Arp III: Far From Shore,” which hits the ears like a car crashing into a brick wall. Gradually, the song reconstitutes itself and swells again; the lyrics of the first movements repeat, but their tone has changed. This is life disrupted by unexpected tragedies and traumas, causing damage and self-doubt but also renewal and growth. “Arp IV: Any Moment” brings us face to face with death—an end point perhaps different than any we ever imagined, but one that we nonetheless not only try to accept, but even embrace. These themes are revisited in standout track “Fell Into the Ocean,” in which the water cycle consumes the body and reconstitutes it, post-life transforming into pre-life once again—a process our Mystic Familiar eases us into with mantra-like refrains of “you must relax before transcend.”

More than just a complete, polished, and satisfying record in an era of sound bites and disposability, Mystic Familiar is Dan Deacon’s first record in which each song was built around one thematic throughline, a meticulously realized landmark in a discography already marked by rich imagination and layered perfectionism. Mystic Familiar captures an established artist mindfully evolving his music from its playful beginnings to encompass a prismatic cosmos of quantum dimensionality. It’s as addictive to listen to as it was for Deacon to work on—a Mystic Familiar transmitted directly from Deacon’s mind to ours, a conversion of self-doubt into an enduring creative work which we can now carry with us in our ears wherever life takes us.

Since forming in 2010, the duo has mounted 19 tours of the U.S., frequently opening for Future Islands, and sharing stages with such acts as No Age, Lightning Bolt, Matmos, and Ceremony. The Music Beat originally worked in a maximalist drums, bass, and vocals mode, releasing the noise-rock full-lengths Jazz Mind (Load Records, 2012), and Party Jail (Infinity Cat Recordings, 2014). Their song “Sermon” is used in the Adult Swim short Unedited Footage of a Bear, and “Rats” appears in Theo Anthony’s feature documentary Rat Film.

For their game-changing new record Riddles, Ed Schrader’s Music Beat has teamed with producer and co-writer Dan Deacon to broaden their sonic palette and explore the possibilities of the art-rock and alt-rock genres. 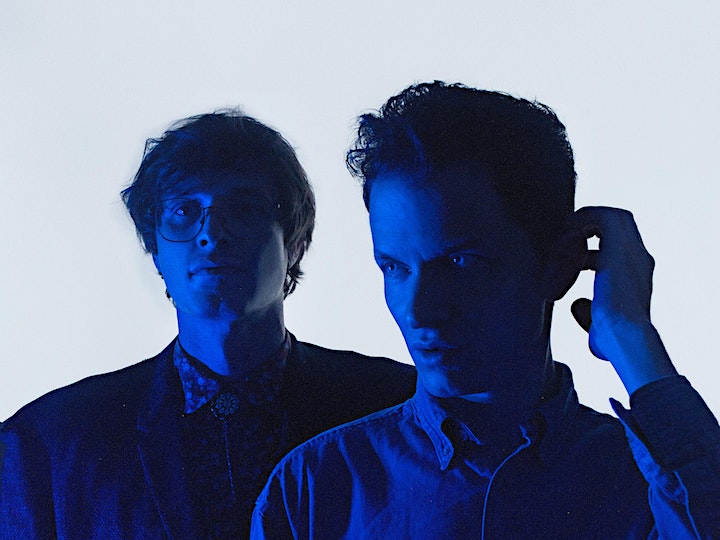