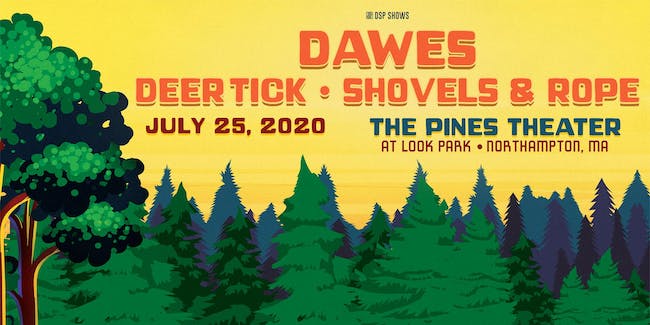 It’s been nearly a decade since Dawes first emerged from Southern California, carrying with them a roots-rock sound that nodded to the past – including the West Coast folksingers and cosmic country-rockers who chased a similar muse during the 1970s – while still pushing forward.

Over the years that followed their North Hills debut, the band evolved and electrified. The grooves deepened. The amplifiers grew louder. Once known for their honest approach to classic sounds, Dawes grew into something different: a forward-thinking, boundary-pushing band for the 21st century, willing to follow inspiration wherever it leads.

On the group’s sixth album, Passwords, that inspiration pulls guitarist/singer Taylor Goldsmith, drummer Griffin Goldsmith, bassist Wylie Gelber, and keyboardist Lee Pardini into their most universal, topical territory to date. This is a record about the modern world: the relationships that fill it, the politics that divide it, the small victories and big losses that give it shape. Taylor’s writing is personal at points – the result of his recent engagement, which lends a sense of gravity and self-reflection to album highlights like “Time Flies Either Way” and “I Can’t Love” – but it also zooms out, focusing not on the director himself, but on everything within the lens.

“When I wrote ‘Most People,’ I was trying to get into this headspace of writing about someone else,” he says, name-checking the band’s Triple A radio hit from 2013’s Stories Don’t End. “I didn’t want to grow into the kind of songwriter who only talks about himself, especially when we’re living in such a unique moment in history. Many of these songs are an attempt to come to terms with the modern world, while always trying to consider both sides of the story.”

“At the same time,” he adds. “I’m also writing about the shifts in my own life, including getting married. Together, the songs process some dark moments – paranoia, anxiety, the wreckage of what you might’ve done in the past – and arrive at some sort of hopeful resolution. I’m hoping it’s our first step into adulthood as a band.”

“Band” is the operative word here. This is the work of a group of road warriors who’ve carved out their blend of amplified folk-rock, bound together by blood (Taylor and Griffin are brothers, raised in the same Malibu home by musical parents) and a nine-year rise from the clubs of Los Angeles to theaters on both sides of the Atlantic. Their playing is nuanced and collaborative, with no single instrument dominating the track list. It’s no surprise, then, that other artists have chosen to collaborated with Dawes both onstage and in the studio, from Jim James to the Killers. It’s also no surprise that these songs, although largely written alone by Taylor (with co-writer Jason Boesel contributing to three tracks), shine a light on Dawes’ full lineup.

Like a highlights reel of the albums that preceded it, Passwords bounces between guitar-driven indie rock (the anthem, atmospheric “Living In The Future”); slick grooves (“Feed the Fire”); blue-eyed SoCal soul (“My Greatest Invention”); and modern folk (“I Can’t Love,” “Stay Down”). At the same time, the album also embraces a spacier, experimental approach. Playing a key role in that sound is keyboardist Pardini – the band’s newest member, having joined the roster not long after the release of 2015’s All Your Favorite Bands – whose analog keyboards push the band far beyond their Americana origins.

“Lee can make amazing sounds out of any instrument,” Taylor enthuses. “He could pull a great tone out of a shoe. Even on a song like ‘Stay Down,’ which is largely acoustic-based and organic, he found a keyboard sound that had a futuristic, mariachi, post-apocalyptic feel.”

Also catapulting the bandmates into new territory is producer Jonathan Wilson, a long-time friend who produced the band’s first two albums. Years before Dawes toured the globe with artists like Kings of Leon, ELO, Bob Dylan, Mumford & Sons, Conor Oberst, and Jackson Browne, they recorded their first songs in Wilson’s studio, developing their sound along the way. Passwords marks their reunion.

“Part of the DNA of Dawes was shaped by Jonathan, much like your first serious girl-friend dictates how you approach relationships for the rest of your life,” Taylor says. “Those first two Dawes records have a certain essence to them. We were figuring out who we were. When it came time to produce our sixth album, why not go back to the guy who started it all with us?”

The band spent three and a half weeks in the studio, focusing on full-band performances that were tracked live – including Taylor’s vocal takes – rather than multiple rounds of overdubs. The result is a warm, lived-in album that spotlights Dawes’ strength as a live act. At its heart, though, Passwords is also a record rooted in craft and consideration. From “Living In The Future,” which encourages its listener to serve as a bright light during darker times, to “Crack the Case,” a timely call for patience and empathy in an age of political partisanship, Passwords uses its words wisely, unfolding with well-reasoned articulation and pointed punch. Rarely has Dawes created such an appropriate soundtrack for the modern age.

“Passwords comes from a line in ‘Living In The Future’: ‘It’s the battle of the pass-words,'” Taylor points out. “So there is a slight political implication – the idea that something so seemingly innocuous and frivolous can potentially shift the direction of a life or even a country. But more broadly than that, a password – this series of numbers, letters and figures – serves as a thin veil between a world you can see and understand, and one you can’t. That means songs can be passwords, too, because they’re a means of giving access to someone else’s perspective, thereby elaborating your own. Songs can unlock something in you, change something, tighten something, enlighten some-thing, or gain access into deeper corners, and that idea makes referring to a collection of songs as Passwords feel really good.”

“Deer Tick is a band.

They are from Providence.

Deer Tick likes to rock out.

As the Brontë sister wrote, “The ties that bind us to life are tougher than you imagine.” Shovels & Rope, the musical duo of Michael Trent and Cary Ann Hearst, embody that bond. Married for a decade, their covenant extends to blood and beyond: as parents, bandmates, and creative collaborators who can now add the pursuits of festival curators, film subjects, and children’s book authors to that mighty list. Having released four studio albums and two collaborative projects (Busted Jukebox, Vol. 1 & 2) since 2008, Trent and Hearst have built their reputation on skill, sweat, and, yes, blood. Now, with the tough and elegant new record By Blood, as well as their High Water Festival in their hometown of Charleston, South Carolina, “Shovels & Rope: The Movie”, and the picture book “C’mon Utah!”, Shovels & Rope are primed for their biggest year yet.

Accomplished musicians in their own right prior to dedicating themselves full time to Shovels & Rope in 2011, Trent and Hearst have made a career together by seizing opportunities and never resting on their laurels or being complacent in doing something just because. Carving out a niche in the music world with strong, roots/indie/folk/rock-inspired efforts like 2012’s O’ Be Joyful, 2014’s Swimmin’ Time, and 2016’s inward-looking Little Seeds, as well as their powerful live show, far-reaching tours, and myriad TV and festival appearances, Shovels & Rope have earned the right to follow their own muse. And so, in an effort to satisfy their numerous creative interests and adapt to a changing industry, Trent and Hearst have firmly planted their flag in realms beyond recording and releasing albums.

The third annual High Water Festival curated by the band will be held over a weekend in April and will bring 10,000 fans to a park in North Charleston to witness a lineup of artists comparable to some of the best in the country—including Leon Bridges, The Head & The Heart, Lord Huron, Jenny Lewis, Mitski, and Shovels & Rope themselves. High Water benefits select organizations and water conservation charities in Charleston and aims to avoid the feeling of corporate inundation and discomfort that plagues many big-name music events. Trent and Hearst work with production companies and agencies to book acts, then serve as on-site hosts in addition to performing throughout the weekend.

“Shovels & Rope: The Movie” is a performance film that has been expanded into feature-length with an external narrative weaving through and connecting the live performances. Directed by their frequent visual collaborator, Curtis Millard, the ‘live show’ portion of the filming took place over two nights at The Orange Peel in Asheville, North Carolina, during the tour for Little Seeds. The rest of the film was shot in various locations in and around the Southeast. The result can be described as a David Lynch meets John Hughes (a fun, silly, and tongue-in-cheek film for fans to enjoy that also represents the band at the peak of their live power.)

The children’s book, “C’mon Utah!”, sets the lyrics from the new song of the same name to illustrations by the artist Julio Cotto. It is an inspirational story, set in the future aftermath of the building and subsequent destruction of the southern border wall. The separated and displaced families are figuring out how to start to put the pieces back together. Communities form to organize and support each other. The parents in these communities tell stories to lift the children spirits and maintain hope through sadness and despair. One such story is about a magic horse named Utah who has the power to help to reunite them with their families on the other side of the devastation. The book is intended as a conversation starter for parents and children to discuss immigration and diversity.

Trent and Hearst have learned to juggle their busy schedules by relying on each other as well as their team, and by seizing every chance for efficiency. They realized one such opportunity by building a modest studio at home, which is where they began to record By Blood in May of 2018. The new space in their back yard provides a sanctuary where their gear can remain at the ready, a luxury conducive to their creative process—especially when sharing a home with kids.

By Blood’s ten songs are vignettes that focus on vulnerable, human characters laid bare, while the textures are gritty, sweeping, and profound. These are tales of inherently good yet incomplete people whose faults are on the table in plain sight, a trait that endears the subjects to the listener and that the songwriters recognize in themselves.

The first single “The Wire” is about accepting your own faults and learning to say you’re sorry. Its stylishly minimal verses and wall of sound chorus recall some raw, girl-group era drama as well as timeless rock and roll. As the gorgeous, dark lullaby of the title track brings the album to its end, the beautiful, cinematic journey of By Blood has left its mark.

And so, bound by blood, by sweat, and by love—of creativity, craft, and family—Shovels & Rope are coming out swinging. From the bind in their band name itself to the shared life they have built from scratch, it’s clear that Trent and Hearst are in constant pursuit of their best selves—together.