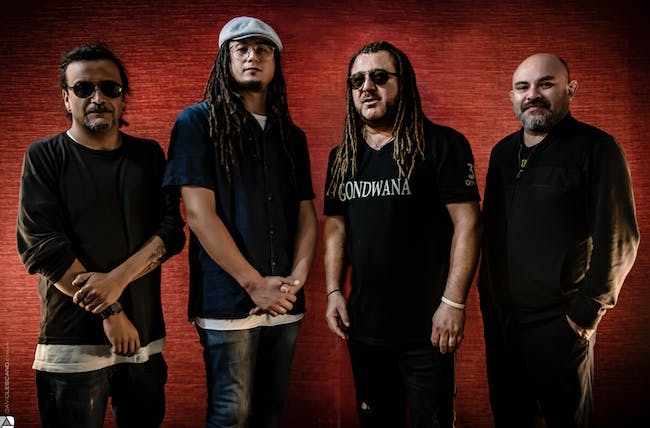 For over thirty years, the Chilean band Gondwana has been touring, performing, and recording uninterrupted. Emerging from the underground music scene during the brutal dictatorship of Agusto Pinochet, Gondwana brings forth a fresh blend of Latin and Jamaican rhythms among other influences such as Rock n’ Roll and soul. With pulsating energy and a smooth, original sound, eight polished musicians are the soul of Chile's number one reggae band.

Through songs dealing with various themes such as romantic love, general love, universal unity, social consciousness, uprising, and spiritual praise, Gondwana reveals both positive and realists messages that serve as an uplifting force for fans of all musical genres. Spirit-moving falsetto notes, bubbling bass, hard drums, guitar solos and arrangements, and horns are the primary ingredients found in the highly acclaimed band’s music.

Without a doubt, Gondwana is one of the most prestigious, solid reggae bands to emerge from South America. With constant movement across the world and a myriad of vibrant live performances, Gondwana continues to deliver an acclaimed repertoire of hits and new material. The band is internationally recognized as one of Chile’s most successful musical acts – not just in reggae but across all genres.

Already superstars in their native Chile and throughout South America, Gondwana has been gaining very enthusiastic fans throughout the world, as evident by their extensive social media following and a sizeable number of international concerts per year. From its humble beginnings in La Pincoya, a notorious northern Santiago slum, to a leading position in Chilean pop music, Gondwana has remained true to their original posture, standing tall and strong in a peace-loving position of musical and lyrical creation.

Formed in 1987 by founder, writer, composer, producer, and bassist I-Locks Labbe, Gondwana has been awarded several multi-platinum albums throughout its 30+ year career. Additionally, they’ve performed numerous times in what are known to be some of the most important festivals throughout the continent. Recently, Gondwana has performed at various renowned festivals such as "Reggae on the River Fest,” "Rock Al Parque" Colombia, “Jamming Fest” Colombia "Vive Latino" Mexico, "Pepsi Music Fest" Argentina, "Cosquin Rock" Argentina, "Quito Fest" Ecuador, twice at the prestigious "Vina del Mar Festival" in Chile, “Ruido Fest” in Chicago, “Lollapalooza” in Chile, and they were the first Latin band to perform at “Cali Roots” in California in 2016. Gondwana has also embarked on numerous worldwide tours such as a 2016 North American Tour that included 53 shows, thus, making it the longest consecutive tour by a Latin reggae band in North America. Some of the cities included Mexico City, Tijuana, Los Angeles, San Diego, San Francisco, Vancouver, Seattle, Salt Lake City, Denver, Phoenix, Dallas, Houston, New Orleans, Miami, Orlando, Atlanta, Charlotte, Washington D.C., New York City, Boston, Montreal, Cleveland, Chicago, and Nashville. The band has also performed in Spain, Sweden, Finland, Germany, and France. Since 2010, the band has averaged over 70 concerts per year and has toured the United States and Canada every year since 2011 and occasionally between 1998 and 2009).

A surprising aspect of Gondwana is their notable digital and social media activity as demonstrated by their ever-growing YouTube fan base that’s currently includes over 130 million views with an average of 30,000 monthly visitors accessing the band's official website www.gondwana.cl, and over 1 million followers on Facebook, over 1.2 million monthly listeners on Spotify, and 150,000 followers on Instagram. Furthermore, many of their songs have surpassed the 20 million mark on Spotify, including “Setimiento Original,” “Antonia,” and Verde, Amarillo, y Rojo.” This can only be attributed to a strong bond and romance between the band and its fans. The fact that the band maintains such a fan base demonstrates what a massive impact the band has had around the world, especially considering that the band has lacked the support from prominent producers or the support of any one of the major record labels during recent years.

Their most recent album was released in early 2017, titled Carpe Diem, with notable features such as Bob Marley’s son, Ky-Mani Marley, Los Autenticos Decadentes, and Matthew Jacquette from Miami. The album was released in May of 2017 under the prestigious Argentina label, PopArt. Their previous album, released in 2015, was titled “Reggae n’ Roll,” a name that provides a tribute to one of Gondwana’s greatest genre influence: Rock n’ Roll. It is worth noting that the most influential band for Gondwana was The Police, a classic rock band. In fact, its founder and chief songwriter, bassist I-Locks Labbe began his music career after witnessing The Police perform at the Viña del Mar music festival in 1982; the inspirations provided by The Police’s concert led to Labbe forming what would become Gondwana in 1987 and eventually performing at the same festival 10 years later.

GONDWANA is officially comprised of the following members:

Their discography has been released in several countries around the world through specialized labels, including the legendary reggae label RAS Records in Chicago. To this date, the band has already surpassed the 450,000 mark for albums sold. They’ve also had 3 platinum albums in Chile and a history of over 900 concerts worldwide.

Songs such as Sentimiento Original, Nuestros Sueños, Chainga Langa, Armonía de Amor, Antonia, Verde, Amarillo y Rojo, Piénsame, and Dulce Amor have become classics and have not only withstood the test of time but have also broken musical boundaries attributed to their shows in 18 different countries.

E.N Young, born Ian Allan Young, is a roots musician born and raised on the USA/Mexico border in San Diego, California. E.N started playing piano at age 6, which was the beginning of his musical life. His parents bought him a white upright Samick Piano that he still records and plays on today. At age 12, he broke his left arm and the doctor recommended some physical activity to help recover. In response, his father bought him a drum set to help with his recovery. Not only did it help physically but E.N found a passion for percussion and drums. With his new drumming talent, he reinvented himself on the piano and his musical world was revealed.

Reggae music has always been a part of E.N Young's life. Growing up with his brothers, Manuel and Mike'Chunky Roots' Marquez, reggae was around and the influence was strong. Daily, E.N and his brothers would search for the next reggae tune that caught their ears and lose themselves within the reggae vibes. Now, E.N is more involved in the reggae scene than ever imagined. Not only has he established a name for himself as an individual artist but also as a writer and producer.

E.N started performing when he was 15 years old and in 2002 he became a member of the band Stranger. As a band they put out four studio albums and toured on the West coast, including Guam and Hawaii; which led them to win the San Diego Music Award in 2009. In 2005, E.N Young met Bonita/Chula Vista locals, Roots Covenant and backed 30+ Jamaican artists. In 2010 E.N began pushing his solo career by releasing his first debut album ‘Luck & Chance No More’ under his new label, Roots Musician Records, May 1 2010. He became the first artist under RMR and began to tour as a solo artist. Along his musical path, he has played onstage with many influential reggae artists including Quino Big Mountain, Devastators, Johnny Clarke, Triston Palma, Sammy Dread, Heptones, Everton Blender, Jah Batta, Michael Palma, Sister Nancy, Edi Fitzroy, Anuhea, Tamarama, Stranger, Carlton Livingston, Don Carlos, Slightly Stoopid, the Abyssinians, Clear Conscience, Eek A Mouse, English Man, Gonzo, Tribal Seeds, Milton Henry and more.

In May 2011, E.N went into studio with Tribal Seeds to produce their new EP ‘SoundWaves.’ The EP was released in July and received world-wide attention. From Hawaii to New York, E.N Young completed a fall national tour as the opening artist for Tribal Seeds. A year after that E.N officially joined Tribal Seeds,playing keyboard, melodica and singing.

E.N Young is continuing to make sweet reggae music in his studio producing tracks for several bands and Roots Musician Records signed artists, including Gonzo, Leilani Wolfgramm, Tatanka, Mystic Roots Band, Clear Conscience, Revival, Animo, Inna Vision and Skanks Roots projects. He released his sophomore album ‘Live, Love, Stay Up’ in January of 2015 which consisted of 27 tracks including acoustic and dub versions. The album featured Tribal Seeds, Maad T-Ray (Of Tribal Seeds), Kali Navales and Jah Gumby (of Ooklah The Moc) and Gonzo. E.N recently released his newest album ‘Call On Me’ in April 2016 with it debuting at #3 on Itunes reggae charts. To E.N Young, ‘Call On Me’ is his most artistic and free album so far and he believes it will be a bridge for new reggae listeners as well as a continuing foundation for roots lovers. E.N Young's main goal continues to be, to travel the world spreading good through music and inspiring others. 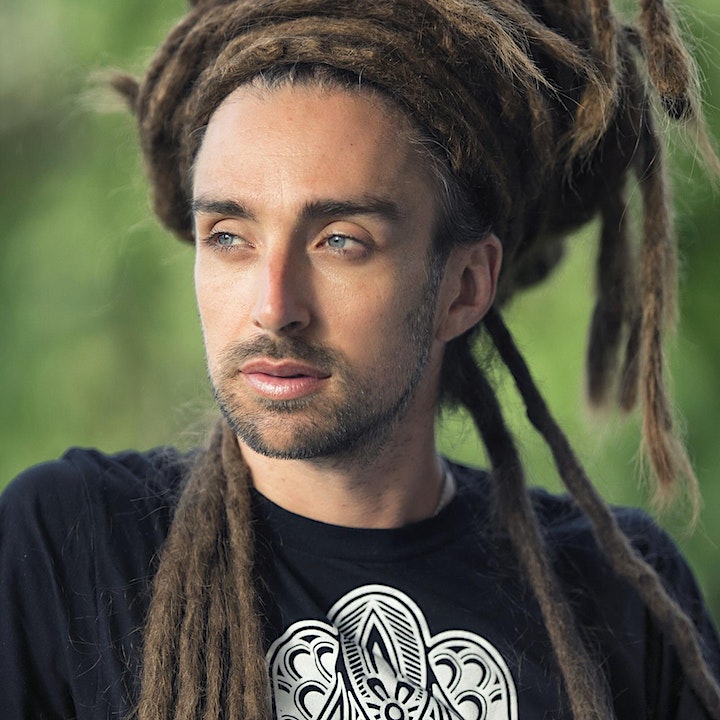