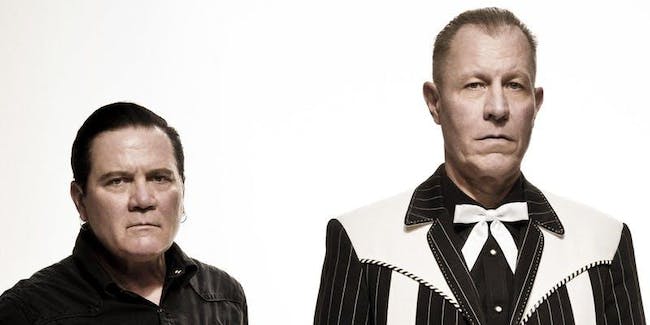 The Reverend Horton Heat is the name of a Dallas, Texas-based psychobilly band. The group is led by James C. Heath, AKA Reverend Horton Heat (2). Heath is a singer, songwriter and guitarist. The group originally formed in 1985, playing its first gigs in Dallas's Deep Ellum neighborhood. Its current members are Jim "Reverend Horton" Heath on guitar and lead vocals, Jimbo Wallace on the upright bass, Arjuna "RJ" Contreras on drums and

Voodoo Glow Skulls are an American ska punk band formed in 1988 in Riverside, California by brothers Frank, Eddie and Jorge Casillas and their longtime friend Jerry O'Neill. Voodoo Glow Skulls first played out at backyard parties and later at Spanky's Café in their hometown of Riverside,Ca, where they played shows with the Angry Samoans, Mighty Mighty Bosstones, Firehose, Murphy's Law and The Dickies.

Their first recording was in 1989- a four song demo on a four-track machine which they duplicated onto about 60 cassettes on a home stereo then sold at shows.

In 1990 Voodoo Glow Skulls put out their first 7" EP "The Old of Tomorrow", a parody title inspired by the straight edge band named "Youth of Today", with the help of local band Public Humiliation and also booked their own DIY US tour.

In 1991, the band added a horn section consisting of Joey Hernandez on saxophone, Joe McNally on trumpet and Osh on trombone (who was replaced later by Brodie Johnson). The band's 2nd independent release came out in 1992 with the "Rasta Mis Huevos" 7" EP for Signal Sound Systems Records. This label also released a glow-in-the-dark 12" EP titled "We're Coloring Fun" and the first release of "The Potty Training Years" on CD. The band continued to book their own diy tours...

Voodoo Glow Skulls recorded their debut album Who Is, This Is? for Dr. Strange Records in 1993, selling 200,000 copies worldwide and gained the attention from Brett Gurewitz, owner of Epitaph Records.[citation needed] The band then signed to Epitaph Records and released four albums that collectively sold over 750,000 copies worldwide. The band began to tour worldwide with their first european tour in 1996 followed by Japan, Australia, Mexico and South America. Voodoo Glow Skulls soon began receiving positive reviews and the mainstream support of commercial radio and MTV and performed as headliners and support act for The Offspring, No Doubt, Reverend Horton Heat, 311 ,and Green Day..[citation needed] Eventually they had main stage spot on the 1998 Warped Tour.

The band has been featured on several of Epitaph's "Punk-O-Rama" releases and has had music featured in video games,tv and movies. The song "Shoot the moon" from the band's "Firme" album was used in the Pauly Shore movie "Biodome" and the band's version of "Used to love her" (originally written and recorded by Guns and Roses)is featured in the "Mr.&Mrs. Smith" soundtrack.

In 2001 Voodoo Glow Skulls parted ways with Epitaph Records and signed to Victory Records. The band has released three albums on the Victory label and continue to tour.

In 2005 and 2008, Voodoo Glow Skulls were featured as one of the headlining bands for the "Ska Is Dead" tour.

2010! The Voodoo Glow Skulls are currently writing and recording their 9th studio album and already have over 20 new songs written and recorded and played the west coast dates of 2010 Warped Tour. No release date for the new album is scheduled but the band continues to tour and perform live and is currently unsigned.