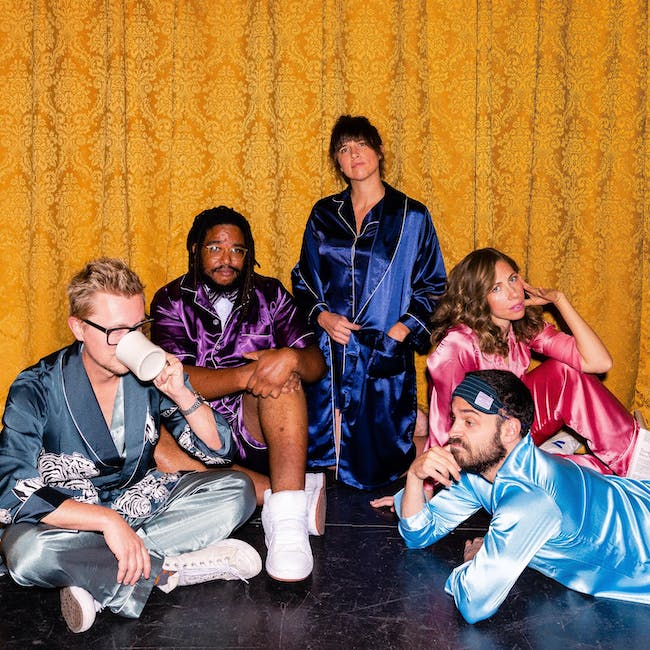 The Lake Street Dive show scheduled for April 9th at the Capitol Center for the Arts in Concord, NH is being postponed. We are working on rescheduling now. All tickets for the original date will be honored for the new date. Please see below for a message from the band:

Hello our dear Divers, we have to postpone our Lounge Around Sounds Tour due to the growing concerns surrounding the COVID-19 pandemic. As awful as it feels, it’s certainly not as awful as our global situation right now, and quite simply, staying home is the right thing to do. However! Tickets will be honored for any rescheduled dates which we hope to have sorted shortly. Please stay tuned for details. And, in the meantime, we’re going to do everything in our power to keep the fun content flowing, as much for ourselves as for our fans. We’re thinking split screen “quarantine” jams, Insty Q&A’s, recipes for eggs-a-billion-ways, webinars, who knows. Like everyone else, we’re learning to navigate a new paradigm. We hope you keep it easy, breezy and stay tuned. And WASH YOUR HANDS 😘

An easy going, semi-acoustic, fireside evening with Lake Street Dive. Come as you are and sing along as the band performs a revue of their 16-year catalog of songs. Deep cuts, works in progress, and fan favorites, all sung around a grand piano. Silk pajamas encouraged.

The title of Lake Street Dive's Free Yourself Up is both an exhortation to listeners and a statement of purpose for the band. The songs have an infectious swagger, even when dealing with awkward breakups or the unsettled state of our world. Free Yourself Up is Lake Street Dive's most confident album yet, seriously soulful and exuberantly rocking. And, in many ways, it is Lake Street Dive's most intimate and collaborative, with the band itself taking over the production reins and working as a tightly knit unit to craft these ten songs. In addition, the quartet drafted touring keyboardist Akie Bermiss to join them in the studio, literally freeing the band up to explore a wider range of instrumental textures, construct more full-bodied arrangements, and build stacks of lively background harmonies.

On Free Yourself Up, the sound is influenced by late sixties-early seventies R&B, AM pop, and FM rock while the lyrics are informed more by contemporary events. The album opens with "Baby, Don't Leave Me Alone With My Thoughts," which envisions a lover acting as a "human shield" against the anxiety of our Twitter-ravaged age. It's funny, sweet, a little angry, and definitely right up-to-the-minute in its sentiment. Singer Rachael Price says, "I thought about that song as the thesis of this record. It's a disco-dance fun song but it's also a person talking about needing comfort from another person, and it has a reference to the political climate."

The lyrics to the guitar-driven "Shame, Shame, Shame," which feels like undiscovered, transistor-radio-ready AM gold, bravely speak to an unnamed person: "No I'm not getting caught in your little spider web/Won't let an angry dog get me down/Don't you think it's time we put this dog out of his misery?/Change is coming, oh yeah..." Bassist Bridget Kearney explains, "This album is based in the realities in our time, which have inevitably become part of everyone's daily life. It's something you think about and obsess over -- and write songs about. Free Yourself Up is about empowering yourself, emboldening yourself, no matter what's going wrong."

Adds drummer Mike Calabrese, "This time around, we were changing so many things anyway, we felt freer to go deep into various subjects, to explore a multitude of emotions to a background of music that is a different direction in and of itself. It's a juxtaposition of new subject matter and new musical developments. We're not just this happy go lucky band anymore."

The band clearly enjoyed itself in the studio as the rhythmically propulsive "Dude" indicates. As the singer complains about a lover who is always out with the guys, a steady beat builds to a big, defiant chorus and then the song veers to the left, culminating in a kind of psychedelic duel between trumpet and guitar, its conclusion marked by echoes of the band's laughter. The percolating "Red Light Kisses" is highlighted by call-and-response vocals between Price and her band mates (doing their best falsettos) and a classic percussion-and-handclaps breakdown towards the end. "Musta Been Something" is a more stripped-down slow-dance ballad, a showcase for Price's voice and Mike "McDuck" Olson's guitar.

"I Can Change" is an even more pensive ballad. "We were watching the news in the summer of 2017 and seeing people trapped in these cycles of hate that humanity can't seem to find its way out of," Kearney explains. "And it's easy enough to look at that from the outside and criticize, but the really hard part is striving to understand your own weaknesses and biases and prejudices and learning to do better. 'I Can Change' is us summoning the courage to do that."

Lake Street Dive was for many years a self-reliant unit. After forming in 2004, while all the members were studying at the New England Conservatory of Music in Boston, they assiduously built a following through a series of independent album releases, countless club tours, and a few lucky breaks. In 2013, producer T Bone Burnett invited them to join a star-studded lineup at a New York City concert where they practically stole the show -- and wound up with a deal from Nonesuch Records. The band's label debut, Side Pony, was greeted with raves. Rolling Stone called it "irresistible" and the Boston Globe said, "Side Pony is a confident, expertly played statement from a band that's been honing its approach for more than a decade, and it clearly shows that Lake Street Dive is ready to make itself known to whatever audiences have yet to succumb to its many charms."

Lake Street Dive spent eighteen months on the road in support of Side Pony. Despite the hectic pace, the band mates started brainstorming about their next album whenever they found a spare moment. As guitarist McDuck recalls, "We remembered how things worked before we added the crew and the bus and the manager. All of that support is great, but it left us with less time to sit around and listen to music together. So when we had a day off, we made a point to sit on the tour bus and play records for each other, the way we used to when we'd drive ourselves in a van."

Free Yourself Up is the sound of a democratic party, organized by a band that has bolstered its deep well of talent with a healthy supply of mutual trust. Though the individual band members had traditionally written separately and then delivered meticulously rendered demos to the group, the process began to change while recording Side Pony. This time Lake Street Dive took that idea further, helping each other out on nascent songs and ultimately deciding to produce the album itself, with the ample help of engineer Dan Knobler, a former Brooklynite now based in Nashville.

That wasn't the original plan. As the Lake Street Dive team was deliberating about which producers to reach out to, they decided to book a demo session on their own at Knobler's tiny Goosehead Palace studio, a modest but very welcoming garage space. Recounts Price, "We go in the studio every two years for a concentrated period of time and then we go on the road and perfect what we do. But we don't have that same practice in the studio. So we said to ourselves, 'Let's practice what recording feels like.' We found out that a) we could have so much fun and b) we work very quickly in a specific way and we collaborated perfectly together." She continues, "I think we were quite scared that without having that fifth neutral voice we would endlessly be in the decision-making process -- because we are so democratic. Our fears were assuaged after that session, though."

They sent the results to Brooklyn-based mixer Joe Visciano and, says Kearney, "he was able to do incredible things, making the record really pop and sound like it was recorded in a multi-million-dollar studio. That seemed like the perfect solution, to do it in a place that was really comfortable." So they returned to Knobler in Nashville to complete the album, forgoing previous notions about moving to a different studio for the next step.

Kearney continues, "The process felt really natural. We had a good amount of tunes to work with, some of which we had played live, some we'd never played at all, and we kept writing during the recording process. We found tools that were fun and worked well in the studio. For instance, a friend had left a Korg synthesizer in my apartment; we tried it on one song and loved it, so we put it on a couple of other tracks," she says. "And Akie was a huge part of the sound of the record as well; the way he plays and chooses to voice things elevates the song."

"There was a fearlessness to the process, an open-mindedness. Collaborating allowed us to feel freer; we were sharing the songwriting burden. Some of these songs almost died in our voice memo apps but were revived -- or Frankenstein-ed -- in the process of collaborating," adds Calabrese. "Dan Knobler became more than just an engineer; he was an arbiter. He was very important to the sound of the record and to certain artistic choices that helped to polish things to perfection."

Kearney summarizes the experience of the band's collaborative, flexible approach to making Free Yourself Up, explaining the origins of lead album track "Good Kisser": "I had thought of the chorus or at least the opening, it was a lyrical idea I had plus a little tiny bit of a melody. Then we were on stage in North Carolina playing this cool funky groove we had started using on 'How It Feels To Be Alone' and I thought, 'That's it! That's the perfect thing for this song idea I have. It really needs to find a home.' I got off stage, went to the dressing room, and wrote almost the whole song -- in the moment, inspired by the strength of the band that I experienced on stage that night."

Bringing the process full circle, Price adds, "When we heard Joe's first mix of that song, I stood up and said, 'I can't believe we made this in a garage!'" 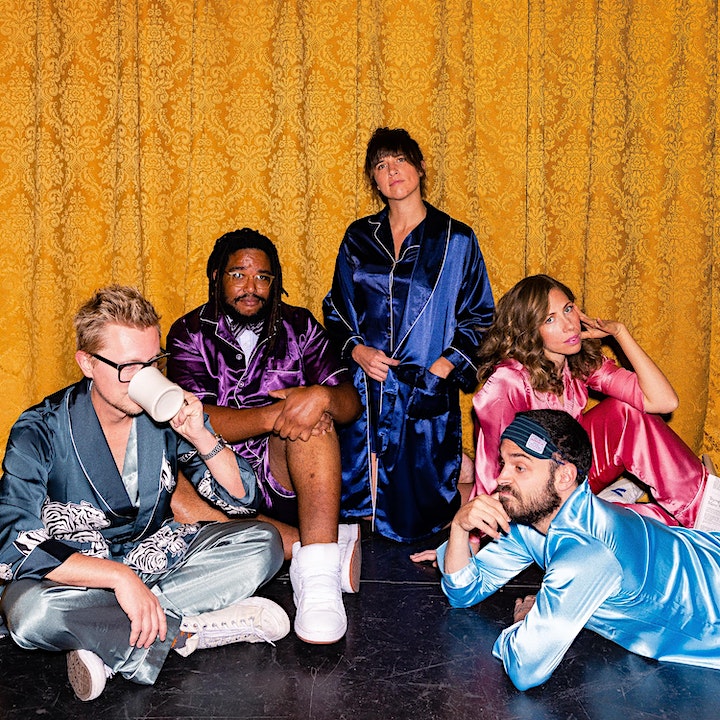