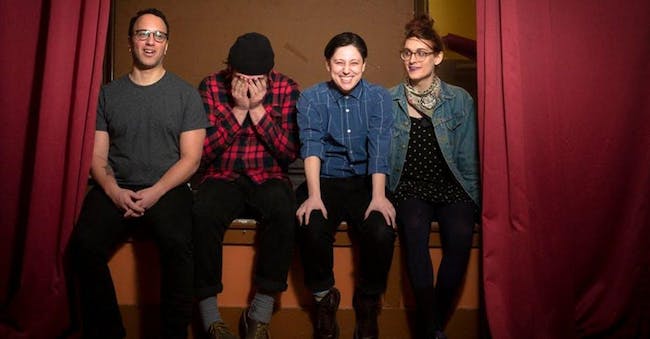 And so opens the first track on Mal Blum’s new LP You Look a Lot Like Me out on Don Giovanni Records October 2nd. In many ways, the scene is immediately set for the record that follows: one that that vastly explores themes of struggle and loneliness through a lens of self-effacing humor. Though perhaps an odd choice for the opening line off most bands’ label debut, this immediate leap into first person narrative is unsurprising in this case.

Marissa Paternoster (guitarist/singer of Screaming Females) produced the album, going through sixteen songs Mal had written and paring them down to ten that made the final cut.

A more mature record than previous releases, due to both time and experience, Mal has written a fully realized, cohesive LP, which is ironic in some ways.

“When I wrote all the songs on the album I was so depressed at that time that I actually didn’t have a concept that I was writing songs. But when I started feeling better everything started to come into place: Don Giovanni wanted me to put out the album, then they put me in touch with Marissa to produce it.”

In many ways, the album is a mental health record, written when Mal was at a low point, and re-worked and polished at a high one. Though at times deceptive, large themes of avoidance (“Reality TV,” “Better Go” and “Cool Party”), escapism (“Iowa” and “New Orleans”), isolation (“Split, Splitting), obsessive thought patterns (“Archive,”) and even the therapeutic process itself (“The Shrink Thinks”) are carefully woven throughout the LP.