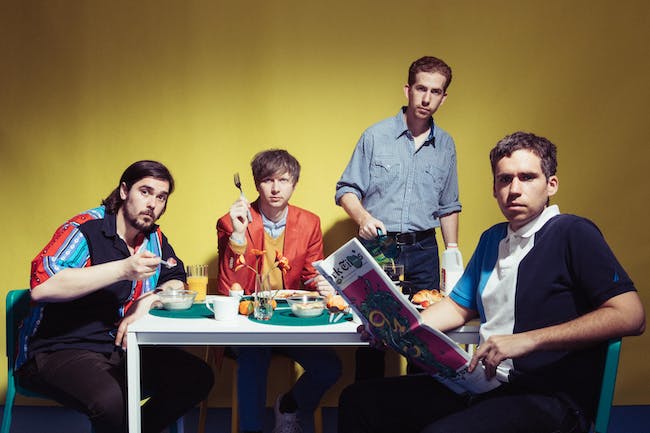 The Parquet Courts show originally scheduled for May 29th at Gateway City Arts has been postponed to July 10th, 2020. All tickets for the original date will be honored for the new date. If you have any questions or are not able to make the new date, please contact Eventbrite at attendeesupport@eventbrite.com

Wide Awake! is New York’s Parquet Courts’ fifth record since their formation eight years ago. It’s also their most groundbreaking. It’s an album about independence and individuality but also about collectivity and communitarianism. Love is at its center. There’s also a freshness here, a breaking of new territory that’s testament to the group’s restless spirit.

In part, this may be attributed to the fact that it’s produced by Brian Burton, better known as Danger Mouse, but it’s also simply a triumph of their songwriter’s art. The songs, written by Austin Brown and Andrew Savage are filled with their traditional punk rock passion, as well as a lyrical tenderness, but are elevated to even greater heights by the dynamic rhythmic propulsion of Max Savage (drums) and Sean Yeaton (bass).

The plan from the start was to introduce new musical ideas previously unexplored by the band. These were varied. For Brown, a few of the touchstones were Grace Jones, The Upsetters, Townes Van Zandt, Parliament and Augustus Pablo. For Savage though, the soundtrack to the sessions in Electric Lady Studios in New York and later at Sonic Ranch in Texas, was different.

“I found myself listening to a lot of ‘80s American punk,” he explains, “I’m talking about Big Boys, Minutemen, The Dicks, Flipper. Bands that were no doubt punk but don’t quite fit in. I’ve always loved the playfulness of Minutemen and Big Boys, and especially the way the latter mixed funk into their sound.”

Two early examples of what these influences meant in practise for the record arrive early. “Violence,” the album’s blistering second song, revisits the proto hip hop of “He’s Seein’ Paths” from 2013’s “Tally All The Things That You Broke” EP. Savage’s furious denunciation of the casual acceptance of violence as part of everyday life is given even greater urgency following the recent shootings in Florida and Sutherland Springs.

“Mardi Gras Beads,” on the other hand, offers a complete different, texturally ambitious standout moment. Brown has never been so vulnerable on a Parquet Courts record, and the band, for all their ferocity, has never played so movingly; it’s a prime example of Brown “writing songs I’ve been wanting to write but never had the courage.”

The band credit their producer Brian Burton with helping them carve out the essence of an idea and bringing his polish to the album.

“The ethos behind every Parquet Courts record is that there needs to be change for the better, and the best way to tackle that is to step out of one’s comfort zone,” Savage says of the unlikely pairing. “I personally liked the fact that I was writing a record that was aggressive and indebted to punk and funk, and he’s a pop producer who’s made some very polished records recently. I liked the idea that it didn’t make sense to work with him, which to me makes total sense as to why we should work with him.”

“I was expecting bringing in a producer would be a redefining element of the band, someone who would pilot us to a new place entirely,” expands Brown, “however where Brian excelled was rather to hold a mirror to the group, and help us bring out our best versions of ourselves.” Indeed it was Danger Mouse, an admirer of the Parquet Courts who originally reached out to work with them.

The record also reflects a burgeoning confidence in the band’s exploration of new ideas in a hi-fi context. For his part, Savage was determined not to make another ballad heavy record like the band’s 2016 Human Performance. “I needed an outlet for the side of me that feels emotions like joy, rage, silliness and anger,” he says. They looked to play on the duality between rage and glee like the bands Youth of Today, Gorilla Biscuits and Black Flag. “All those bands make me want to dance and that’s what I want people to do when they hear our record,” adds Savage.

For Brown, death and love were the biggest influences. One of the most courageous songs on the new record is “Death Will Bring Change,” a moving elegy, with a chorus not unlike the Rolling Stones’ “You Can’t Always Get What You Want,” only this time, London’s Bach Choir were 15 twelve year olds from the upper east side being recorded at 9am on a Saturday. “Nothing scarier,” says Brown.

The songs on Parquet Courts new record also make you think of what Joe Strummer of The Clash once said, about why he wrote songs – i.e. “to expand people’s vocabularies.” So set against the likes of the elegiac “Mardi Gras Beads” is the opening track “Total Football.” Named after the eponymous theory of soccer pioneered by the Dutch that requires every player to be able to play every position on the field, it has shout-outs to iconic individualists like the painter Cy Twombly, the poet Mina and sculptor Eva Hesse.

It’s a song about “opposing the tired alpha-male-lone-wolf archetype that too many people rely on as an avatar,” Savage explains, and lauding “creative and inspiring individuals (the song also touches on KoBrA, The Beatles and The Black Panthers) that approached individuality in a way that wasn’t contrary to collectivism, and vice versa.” Much like the band themselves – four individual artists forging a brave new world of sound.

Ultimately then the message contained in Wide Awake! is complex. “In such a hateful era of culture, we stand in opposition to that — and to the nihilism used to cope with that — with ideas of passion and love,” Brown says. For Savage, it comes back to the deceptively complex goal of making people want to dance, powering the body for resistance through a combination of groove, joy, and indignation, “expressing anger constructively but without trying to accommodate anyone.”

That they’ve managed to weave such disparate themes into such a unified whole says everything about Parquet Courts’ achievement on Wide Awake!. This isn’t just another record by them, it might well be the record.

Comprised of Veronica Torres, Jonathan Campolo, and Benjamin Jaffe (all of the beloved and freshly defunct Pill) alongside Jonathan Schenke and Bob Jones of the electronic/art-rock favorite Eaters, P.E. features some of NYC's most notable experimental voices. Turn on the human music of the 21st century. 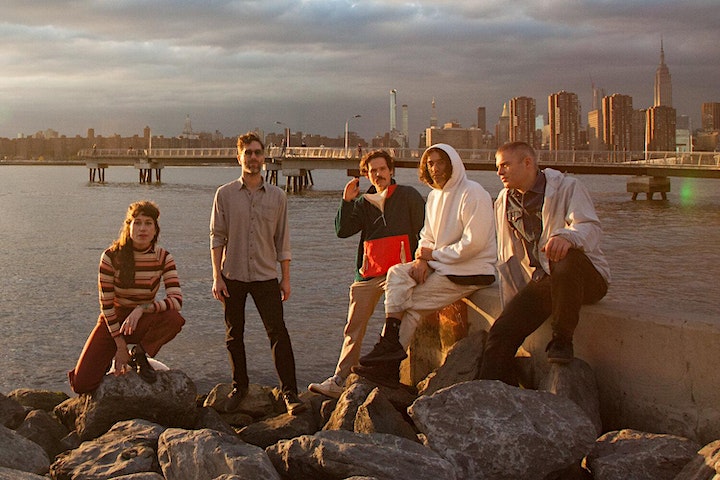