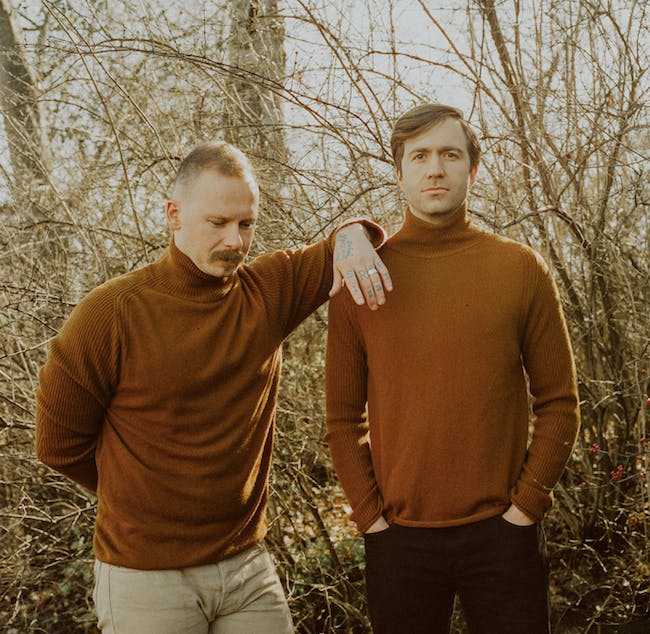 The Penny & Sparrow show originally scheduled for April 24th at The Haunt has been postponed to August 21st, 2020. All tickets for the original date will be honored for the new date. If you have any questions or are not able to make the new date, please contact Eventbrite at attendeesupport@eventbrite.com

“Almost everything changed for us in these last two years,” says Andy Baxter, one half of the acclaimed duo Penny & Sparrow. “It was a painful experience in a lot of ways, but it was also a joyful one.”

Joy and pain walk hand in hand on ‘Finch,’ Penny & Sparrow’s magnificent sixth album. Written during their first major break from the road in years, the record finds the band reckoning with a prolonged period of intense personal transformation, a profound awakening that altered their perceptions of masculinity, sex, religion, divorce, friendship, vanity, purpose, and, perhaps most importantly, self. Deeply vulnerable and boldly cinematic, the resulting songs blur the lines between indie-folk and alt-pop, with dense string arrangements and atmospheric production underpinning soaring melodies and airtight harmonies from Baxter and his longtime musical partner, Kyle Jahnke. It’s a revelatory collection, both for the listener and the performers, one that’s been a lifetime in the making.

“We were both brought up in the conservative South, where you’re instilled with the notion that the straight white Evangelical Christian male perspective is, if not the only, then the most correct view,” Baxter explains. “We didn’t understand how wrong that was until we went out and experienced the world for ourselves.”

“Touring was what really got us outside of that bubble we grew up in,” adds Jahnke. “We met so many people on the road whose lives were so different from ours, and that led to conversation after conversation in the van about the beliefs we’d grown up around and whether they were the sorts of things we wanted to carry with us.”

Texas natives, Baxter and Jahnke first crossed paths at UT Austin, where they developed both a fast friendship and a deeply symbiotic musical connection. Jahnke was a gifted guitarist with an ear for melody, Baxter an erudite lyricist with a mesmerizing voice and crystalline falsetto, and the duo quickly found that their vocals blended together as if they’d been singing in harmony their whole lives. Beginning with 2013’s ‘Tenboom,’ the staunchly DIY pair released a series of critically lauded records that garnered comparisons to the hushed intimacy of Iron & Wine and the adventurous beauty of James Blake, building up a devoted fanbase along the way through relentless touring and word-of-mouth buzz. NPR praised the band’s songwriting as a “delicate dance between heartache and resolve,” while The World Café raved that they’ve “steadily built a sound as attentive to detail as Simon & Garfunkel and as open to the present day as Bon Iver,” and Rolling Stone hailed their catalog as “folk music for Sunday mornings, quiet evenings, and all the fragile moments in between.” In addition to the mountain of glowing reviews, the band also earned high profile fans—including The Civil Wars’ John Paul White, who produced 2015’s ‘Let A Lover Drown You’—and extensive tour dates with everyone from Josh Ritter and Johnnyswim to Drew Holcomb and Delta Rae.

“We toured really hard for a long time, and when we finally decided to take a break, it felt like a chance for the dust to settle and for us to process the evolution we’d been through,” explains Baxter. “It was our first opportunity to experience life in a new skin and explore what happens to your relationship with the people you love when change is introduced.”

Writing the songs that would become ‘Finch,’ Baxter and Jahnke often found themselves grappling with simultaneous feelings of discovery and loss, strength and weakness, birth and death.

“It was difficult to realize that what you grew up believing doesn’t have anything concrete to back it up,” Baxter continues, “but on the other hand, there’s this sense of peace that comes from finding something to believe in that feels genuinely solid in your chest. I’ve learned to love myself more than ever before because of it, and that’s in turn made me a better person to myself and to my wife and my community.”

For the first time in their career, the band decided to write and record the new album remotely in order to spend as much time with their families as possible. Jahnke, who lives in Austin, would capture melodic and harmonic ideas in voice memos and send them off for lyrics to Baxter, who now resides in Florence, AL. When it came time to record, Jahnke laid down his instrumental work in San Antonio with frequent production collaborator Chris Jacobie, while Baxter cut his main vocals at a studio just a mile down the road from his house.

“It was a totally freeing way to make an album,” says Jahnke. “It allowed us to take our time and work when we felt most comfortable, and it also made it easier to trust our instincts. We were each hearing everything the other recorded with fresh ears and no preconceptions, so there wasn’t any second-guessing or deferring to other people in the room. We knew instantly when we got it right and when a song was finished.”

The record opens with the stunning “Long Gone,” a heavyhearted, melancholic gem that the band actually reverse engineered, recording the vocals first and writing a musical bed to go underneath it after. As unusual as the approach was, it exemplified the duo’s willingness to take chances on the album and their desire to push themselves to places they hadn’t yet explored. The waltzing “Bishop,” for instance, finds Baxter pulling lyrical influence equally from Shakespeare and Ray Bradbury, while the stirring “Eloise” doesn’t introduce a single instrument until nearly a minute into the song.

“We weren’t in a rush writing this music, and I think that sense carried over into our willingness to try new things in the studio,” says Jahnke. “At the end of the sessions, we got together in San Antonio to put the finishing touches on everything, and we ended up recording the vocals for that song totally a capella with just a room mic.”

Adventurous as it may be, ‘Finch’ still nails many of the quirky, playful trademarks Penny & Sparrow have come to be loved for. The infectious “Don’t Wanna Be Without Ya” imagines reincarnation as a way to make romance last forever, while the sultry “Recuerda” uses learning a language as a metaphor for falling in love, and the stirring “Gumshoe” aims to see life with the analytical mind of a detective and the childlike wonder of a magician. Perhaps it’s the dreamy “Stockholm,” though, that best captures the heart and soul of the record.

“That song to me feels like the first challenging conversation you have with someone very different than you,” says Baxter. “It’s about recognizing the systems of thought that can trap you and being open to self examination and change.”

In the end, that’s what music offered for Penny & Sparrow, a chance to see things from a new perspective, a chance to open their eyes and their minds and their hearts, a chance to put themselves in the shoes of others and walk through this world with more love and acceptance than they’d ever thought possible. They titled the album ‘Finch’ as a nod to Charles Darwin, who developed his theory of evolution in part by studying the changes that manifested over time in groups of birds that moved to different islands across the Galapagos, and it’s easy to see the connection.

“We changed islands,” reflects Baxter, “and that in turn changed us and our relationships with the people we care about most in some truly beautiful ways.”

Jen Cork has a passion for dirt, baritone ukes, 1904 uprights, vocal layering, emotional honesty and found sounds. Piano, guitar, melodica, and damn, she can sing….and her voice is just the beginning. From packed art galleries, camp fire circles in Michigan, and harmony singing to deep listening rooms, Jen is at home.

She is a well-known part of the music scene in Ithaca, NY. She ruminates on rusty turnbuckles. She loves the history, grit and intersection of nature and mechanical objects, and her emotional songwriting grows out of these timeworn landscapes. There is history in her voice and legacy in her songs.

Cork was named “Best Female Singer” by the Ithaca Journal.

Finger Lakes Music Press called her a “Superb Vocal Stylist,” and her band was selected to perform at the Confluence Benefit for the National Women's Hall of Fame in Seneca Falls, NY. 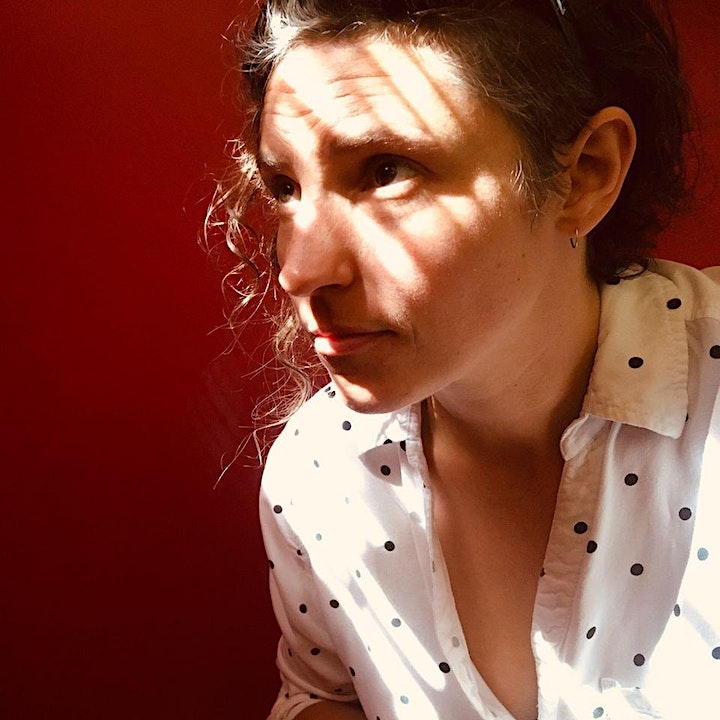