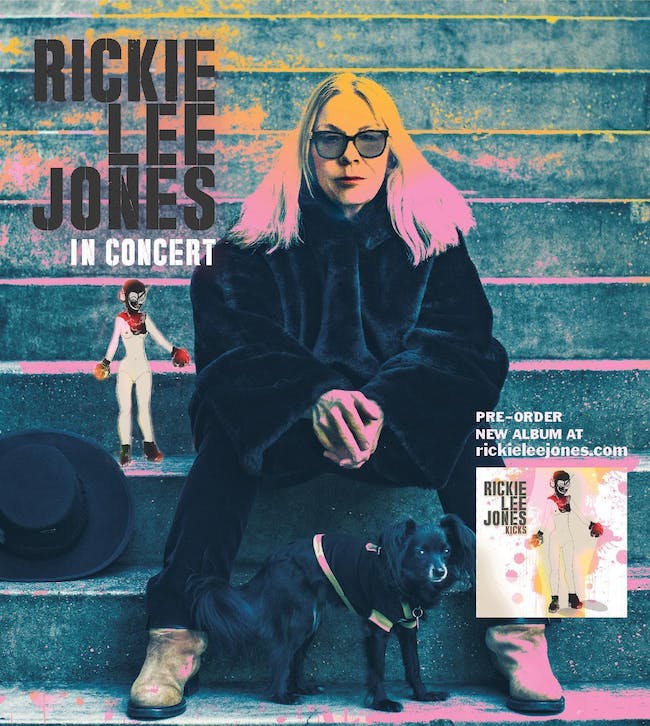 RICKIE LEE JONES is that rare musician who has transcended the singer/songwriter mantle by incorporating different radio genres from the get-go and she continues that tradition on the forthcoming album KICKS, her newest collection of songs from the great American songbook. Due out June 7, the album spans two decades (50s-70s) of pop, rock and jazz, presenting her unique and sophisticated interpretations of these songs.

Miss Jones’ own label, OSOD (other side of desire), will release KICKSwith Thirty Tigers distributing. The past decade has seen her team up with manager Ron Stone (Nirvana, Bonnie Raitt, among others) and her team is innovating a new fund-raising campaign to promote this project.

It is fitting that one of the American treasures of songwriters should be comfortable with this diverse collection of the great songwriters of the 20th century–she is one of them. On KICKS, she brings emotion to sleeper album tracks like “My Fathers Gun”and her tongue-in-cheek humor to songs like “Houston.” The album will be previewed by the infectious, insistent track of hope “Lonely People,” which arrives at radio April 19; it was a Top Five Billboard hit in 1974, originally recorded by America. The song will be available as an instant grat track that same day with the purchase of the pre-release of the album.

Weaving the connection between 70’s rock and 50’s jazz was no leap for JONES. “It is all part of what I heard growing up,” says JONES. “The radio played everything! 1960’s AM radio was the primordial zone for our musical life today. As a kid I heard R&B, country, rock, and the most sophisticated singer-songwriters of the day forming their genre.Radio was a college education for a budding musician because these songs are all playing on my internal radio all the time, it’s not a stretch for me to put them together on an LP. Really, I just love to sing.”

The album cover, by artist Peregrine Honig, is a super-hero woman in boxing gloves. Sound like anyone we know? RICKIE LEE JONES, superhero, with a super weapon smile! “In times like these, “Miss Jones smiles, “a smile can be subversive. Here is Rickie Lee‘s musical smile.”