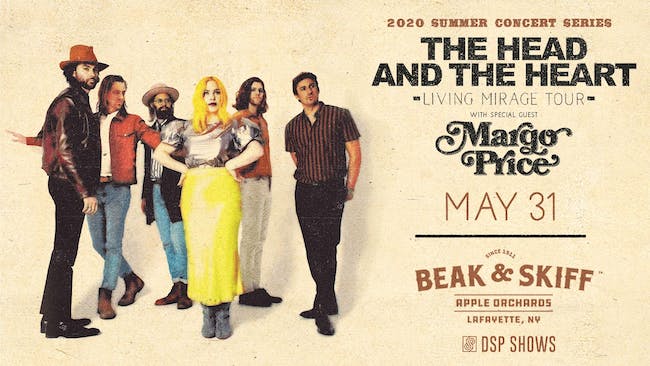 The Head and the Heart

The Head and the Heart

The Head and The Heart’s “Missed Connection” recently secured multiple weeks at the #1 position on the Mediabase and BDS Alternative Radio Charts - already having achieved multiple weeks at #1 on the AAA charts. “Missed Connection” is the lead single from Living Mirage, the band’s fourth full-length album, released on Warner Records / Reprise Records to critical praise earlier this year. This marks the band’s second #1 at Alternative, having previously landed the position for “All We Ever Knew” (Signs of Light), which also held the #1 spot at AAA for nine straight weeks in 2016. The band’s second single from Living Mirage, “See You Through My Eyes” was recently #1 most added at AAA radio.

Initially self-released in 2011, The Head and The Heart’s self-titled breakout debut produced instant classics including “Rivers and Roads,” “Down In The Valley” and “Lost In My Mind” (#1 at AAA) and is now Certified Gold. Their last two albums, 2013’s Let’s Be Still and 2016’s Signs of Light, settled into Billboard’s Top 10 albums chart, with Signs of Light securing the #1 position on Rock Album Charts. They have appeared in Cameron Crowe’s Roadies, with music featured in countless other commercials, films and TV, among them Corona, Silver Linings Playbook and more. The band has established their status as a touring powerhouse, having landed prime time mainstage slots at Coachella, Lollapalooza and Austin City Limits. In total, the band has performed 15 times on national television including appearances on Ellen, The Tonight Show Starring Jimmy Fallon, The Late Show With Stephen Colbert, Austin City Limits with more to come in the coming months.

A lot can change in a year: markets boom and bust, trends come and go, presidents get elected. In 2015, Margo Price was a country underdog just trying to keep enough gas in the tank to get to the next gig, but by the end of 2016, she was one of the genre’s most celebrated new artists and a ubiquitous presence on late night television and at major festivals around the world. It’s the kind of year most musicians can only dream of, and the arrival of Price’s spectacular sophomore album, “All American Made,” proves that she hasn’t taken a moment of it for granted. Delivering on the promise of her debut and then some, the record finds Price planting her flag firmly in the soil as a songwriter who’s here for the long haul, one with the chops to hang with the greats she so often finds herself sharing stages with these days.

“People have started asking me, ‘Now that you’re having success, what are you going to write about?’” Price recounts with a laugh. “A lot of what I wrote on my debut came out of my struggles in the music business, but we don’t have any shortage of material now. I’m just excited to finally have an audience and know that people are going to listen to our songs.”

A prolific writer with a knack for candid self-reflection, Price has never had to look too far for inspiration, and on ‘All American Made,’ she and her songwriting partner/husband, Jeremy Ivey, continue to depict the trials of everyday life with unflinching honesty, painting poetically plainspoken portraits of men and women just trying to get by. Highs and lows, long nights and hard days, wild women and cocaine cowboys, politics and sexism, it’s all in there, singularly filtered through Price’s wry, no-bullshit perspective. Throughout the album, her contemporary take on classic sounds is at once familiar and daring, an infectious blend of Nashville country, Memphis soul, and Texas twang that tips its cap to everyone from Waylon and Willie (who makes a guest appearance) to Loretta and Dolly, all while flipping a middle finger to the cookie-cutter pop that dominates modern country radio. Rich with swirling pedal steel, honky-tonk rhythms, and Price’s stop-you-in-your-tracks vocals, ‘All American Made’ is deeply reverent of tradition even as it challenges conventions, a nuanced exploration of conflicted emotions for our deeply conflicted times.

Far from overnight, Price’s recent meteoric rise is the product of more than a decade of hard work and sacrifice. While she’d long been one of East Nashville’s best-kept-secrets, she burst onto the international scene with the 2016 release of her first solo album, ‘Midwest Farmer’s Daughter.’ The record debuted in the Top 10 on Billboard’s Country Albums chart and graced Best-Of lists everywhere from Entertainment Weekly to NPR Music, who called it "the hard-won arrival of an artist who feels like she's always been here.” Vulture described Price as “one of the most compelling country talents to come out of Nashville in recent memory,” while Pitchfork hailed the album as “a potential classic,” and Rolling Stone praised its “amazingly vivid songcraft.” Price solidified her next-big-thing status with stellar performances on Saturday Night Live, Colbert, Fallon, CBS This Morning, Seth Meyers, A Prairie Home Companion, and more, in addition to taking home Emerging Artist of the Year honors at the Americana Music Awards and winning The American Music Prize for the year’s best debut album. She shared stages and bills with Willie Nelson, Bob Dylan, Kris Kristofferson, Emmylou Harris, and Chris Stapleton among others, and her compelling story—years of toil in the Nashville trenches, the loss of her family’s farm and the tragic death of her infant child, a brush with the law, selling her car and pawning her wedding ring to afford studio time, signing to Jack White’s Third Man Records as the label’s first country artist—was recounted in glowing profiles everywhere from the NY Times Magazine and the New Yorker to Morning Edition and Fader.

When it was time to record the follow-up, Price and her band headed back to Memphis, TN, where they’d cut ‘Midwest Farmer’s Daughter’ on a shoestring budget. Instead of returning to Sun Studios, though, they moved down the street to the larger Sam Phillips Recording studio, which the legendary producer opened in 1960 when his own skyrocketing success necessitated more space.

“We recorded live again because that’s really how I like to work,” Price explains. “We’d get in around ten or eleven each morning, and then after about twelve hours of recording, we’d all start yelling for tequila, take a shot, and then just keep going.”

That spirited, energetic atmosphere infuses even the record’s darkest moments with a potent sense of vitality. On the uptempo album opener “Don’t Say It,” Price dishes out sardonic wordplay over smoking hot guitar, while the pedal-steel and fiddle-fueled “Weakness” toes the line between sobriety and mayhem, and the tender “Learning To Lose” finds her living out a country music fantasy as she duets with Willie Nelson.

“We’d gotten to know him a bit from playing shows together and I idolized the hell out of him,” says Price. “I didn’t know there were people like that, who’d achieved such massive stardom but remained so down to earth.”

Old school country may be the album’s most obvious touchstone, but Price and her band incorporate 60’s and 70’s R&B into many of the arrangements here, fusing two of Tennessee’s greatest musical exports. The funky “Do Right By Me” shimmies and grooves with Gospel legends The McCrary Sisters helping out on backing vocals, and the driving “A Little Pain” gets an assist from sweeping orchestration by Memphis legend Lester Snell (the man responsible for the string arrangements in “Shaft”).

“Sometimes you feel like you’ve got to please everybody, but ultimately you should be the one you’re worrying about taking care of,” Price says of the inspiration behind the song. “I wrote it pretty quickly just thinking about being on the road and trying to keep it together while you’re burning the candle at both ends.”

They say write what you know, and there are few things Price knows better than the road and the myriad of obstacles facing women who make their living on it. On “Pay Gap,” she laments the financial state of gender inequality (“why don’t you do the math? / Pay gap, pay gap / Ripping my dollar in half,” she sings), and “Wild Women” looks at the hypocrisies of what’s expected from male musicians compared to their female counterparts.

“There’s a definite double standard,” says Price, “but I think if you’re out there long enough, you stop giving any fucks and you just want to call it out. I get asked questions in interviews that no man would be asked, and if I’m assertive about what I want for me and my band, I get called a ‘diva.’ That song is really about the judgment I get from people who act like women shouldn’t be out on the road. Girls should be encouraged to follow their careers and their dreams just as much as men.”

The album closes with an intimate, acoustic rendition of “All American Made,” a song which calls to mind “Born In The USA” with its patriotic-sounding title and far more troubled lyrics.

“We actually wrote that song during the Obama administration,” says Price, “but it really altered meaning for me on the day Trump was elected. That song embodies the good and the bad in the ugly in this country. America is so beautiful to me, but it’s in a really hard spot right now. I feel like I was one of the first and only country artists to speak out so openly against Trump, and I had a lot of people tell me I shouldn’t be giving my opinion, but as far as I’m concerned, there’s not a lot of doubt about the difference between right and wrong.”

That candor is part of what makes ‘All American Made’ such a powerful follow-up release. Price could have taken her moment in the spotlight as an opportunity to homogenize and chase a slicker, more polished sound built for radio and arenas, but instead, she doubled down on the grit and the truth in her music. It’s honesty that brought her to this remarkable moment, and honesty that will continue to carry her into the future. How much higher will Margo Price’s star rise? Only time will tell, but just remember, a lot can change in a year.