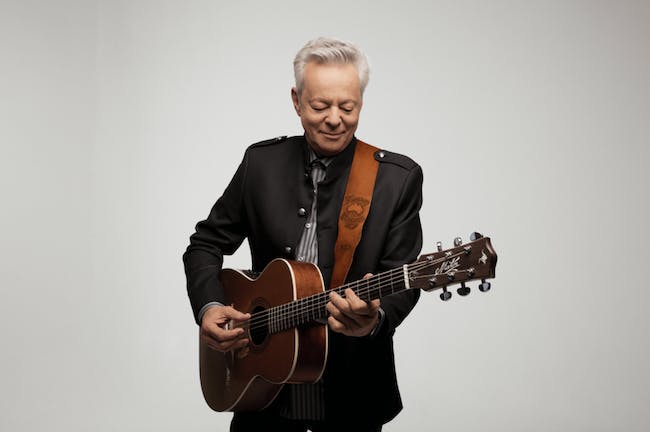 Tommy Emmanuel has achieved enough musical milestones to satisfy several lifetimes. Or at least they would if he was the kind of artist who was ever satisfied. At the age of six, he was touring regional Australia with his family band. By 30, he was a rock n’ roll lead guitarist burning up stadiums in Europe. At 44, he became one of five people ever named a Certified Guitar Player by his idol, music icon Chet Atkins. Today, he plays hundreds of sold-out shows every year from Nashville to Sydney to London. All the while, Tommy has hungered for what’s next. When you’re widely acknowledged as the international master of the solo acoustic guitar, what’s next is an album of collaborations with some of the finest singers, songwriters and, yes, guitarists alive today.

“For me, music has always been about collaboration–the push and pull you get from another human being’s energy,” explains Tommy. “Even when I play solo, it feels like I’m playing to the emotions I’m getting from the crowd. To feel the love or the joy or the hope coming through these other pickers and singers was electric–I played in ways I never would on my own.” Accomplice One is a testament to Tommy’s musical diversity, the range of expression that stretches from authentic country-blues to face-melting rock shredding, by way of tender and devastating pure song playing. The songs are a mix of new takes on indelible classics and brand new originals from Tommy and his collaborators. The artists who stepped forward to join Tommy in the studio are an impressive list of some of today’s most respected performers, from across the musical spectrum–a lineup including Jason Isbell, Mark Knopfler, Rodney Crowell, Jerry Douglas, Amanda Shires, Ricky Skaggs, J.D. Simo, David Grisman, Bryan Sutton, Suzy Bogguss and many more.

This is an album for all types of Tommy Emmanuel fan–from longtime guitar aficionados who’ve followed his career for decades, to lovers of great songs and melodies who flock to Tommy’s shows for the emotional authenticity driving every performance. Grammy-winning singer-songwriter Jason Isbell conjures up the sweaty atmosphere of his Muscle Shoals roots on opener “Deep River Blues,” a classic fingerpicked blues which has been a longtime staple of Tommy’s live shows. Country and bluegrass legend Ricky Skaggs lends his mandolin and unmistakable voice to “Song and Dance Man,” a chronicle of a life lived for the next show. Tommy’s subtlety and tastefulness blends with Amanda Shires’ gorgeous vocal and fiddle playing to transform Madonna’s “Borderline” and Rodney Crowell’s “Looking Forward to the Past” could’ve topped the country charts in another era, with Tommy’s propulsive rhythm supporting Crowell’s sly lyrics while his tasty lead playing weave in and out. For those hankering for virtuosic hot picking, the rave-up “Wheelin’ and Dealin’” sees him trading licks with J.D. Simo and Charlie Cushman, while a jaw-dropping rendition of “Purple Haze” with Dobro master Jerry Douglas captures all the fire and energy of the Hendrix original as the two modern masters push each other to new heights with each raunchy slide and bend. On “You Don’t Want to Get You One of Those,” a sly vocal and acoustic duet with Dire Straits’ legend Mark Knopfler, there was a third, invisible presence in the studio– the late Chet Atkins. “Mark and I both learned so much from Chet–he was a hero and a mentor to each of us, and we’ve tried to bring his spirit forward into the future in our own playing,” says Tommy.

“This song that Mark wrote captured Chet’s sense of humor so well and I had the time of my life in the studio with him conjuring the master as we laid it down.” While this was the first time he and Knopfler had collaborated, the album also featured some of Tommy’s longtime fellow road warriors, who have covered the miles in buses and planes around the world on tour over many years. “Djangology” is a gypsy jazz treat cut live in Havana, Cuba with Frank Vignola and Vinny Raniolo and “Rachel’s Lullaby” reunites Tommy with Hawaiian ukulele master Jake Shimabukuro. The song, written for Tommy’s youngest daughter, shows him continuing to find inspiration from an evergreen source–his love of his family. Since he and his brother Phil taught themselves to play as toddlers, the guitar has been Tommy’s real first language–and he’s more articulate on his signature Melbourne-made Maton acoustics than most people are with words. His unerring sense of groove marked him as Australia’s youngest rhythm guitarist as The Emmanuel Quartet crisscrossed the country. By the time he made it to the big city in his late teens, Tommy was a rock star, slinging a Fender Telecaster alongside the biggest stars of the day. It was a good life, but deep down Tommy knew there was more to his musical destiny. A shy country kid with little confidence, it took an encouraging meeting turned jam session with his guitar hero Chet Atkins to build his self-belief. By the late 80s he was ready to go it alone, to make instrumental guitar records made for an audience broader than just guitar fans–a move with zero precedence in Australian music. Despite the odds, Tommy released a string of hit albums, racking up awards wins and nominations, and becoming a huge celebrity in his home country, culminating in an incendiary performance with his brother Phil at the Sydney Olympics in 2000.

Influenced by the Merle Travis/Chet Atkins fingerstyle of guitar picking, Tommy developed a style of solo guitar playing that encompasses the range of a whole band– covering drums, bass, rhythm and lead guitar and a vocal melody simultaneously. No loop pedals, no overdubs, just one man and ten fingers. While some artists take ten-piece bands on the road and still fill out the sound with backing tracks, Tommy builds a complete sonic world entirely on his own. For many players, the technical mastery of the technique would overwhelm the emotion of the music, but not for Tommy. His idols are not just the great players, but also the great pop songwriters and singers–Stevie Wonder, Billy Joel, Paul Simon, The Beatles and their ilk. While thousands of fans have spent years trying to unpack and imitate Tommy’s technique, for him it’s just the delivery system. His approach is always song and emotion first, his music the embodiment of his soulful spirit, sense of hope and his love for entertaining. Which is not to say he dismisses the CGP, the Guitar Player awards, the Grammy nominations, the numerous magazine polls naming him the greatest acoustic guitarist alive. He’s grateful for it all, and the incredible journey that’s led him to the most invigorating period of his career–six decades into it. For Tommy though, the greatest reward is always the same–to make the next great record, and to see the beaming audience at the next great show. “When I was a kid, I wanted to be in show business. Now I just want to be in the happiness business–I make music, you get happy. That’s a good job.” Tommy isn’t the kind of man who looks to nostalgia–it’s more that he treats his history in the same way he treats the history of music overall: There’s magic threaded in through all the eras that’s worth celebrating and revisiting.

Now in his sixties –although on stage he can seem 25–life and music are about improvisation, variety and happiness. “Making Accomplice One has been this great journey through so many of the worlds I’ve inhabited through the years,” concludes Tommy. “Playing with old friends, new friends, heroes, people I’ve been like an older brother to… and musically to jump around from bluegrass to jazz to blues to just pure songs, it’s like going to the world’s greatest buffet and picking out all my favorite meals. People try to categorize what I do, to put me in a genre or put a label on me. I always go back to that old Duke Ellington line, about there being two types of music, good and bad.” Well I try and play the good kind, and on this record I got to play it with the best people.”

Though he grew up in the generally frozen landscape of Troy, New York, Sean Rowe spent many of his formative summers in DeLand, Florida — a small town between Orlando and Daytona Beach — where his father was a residential caretaker at a home for troubled youths. It was there, in a mercifully air-conditioned, mostly unused building filled with donated musical instruments, that Sean taught himself to play drums and then bass. For those who have wondered where his distinctly low and percussive approach to guitar playing comes from, I believe you now have your answer.

During those same years, when he wasn’t listening to heavy metal or building his early musical chops, Sean was in the woods exploring, foraging, and obsessively learning all that he could about the natural world around him. Since then, his fascination with the subject has only grown and through his new web-series, Can I Eat This?, he’s found a means of indulging two of his great passions: music and nature. In each of the forthcoming episodes of Can I Eat This?, Sean will guide a fellow musician on a foraging mission for all manner of wild foods. The two will use their harvest to prepare some tasty creation and end their adventure by performing a cover song together. Look for new episodes this summer!

This year started with a successfully-funded Kickstarter campaign to support the production of Sean’s new full-length album. For this record, he teamed up with longtime producer and friend Troy Pohl, who helmed production on the albums Magic, Madman, Her Songs, and various other EPs. The two traveled to Eau Claire, Wisconsin to team up with producer and multi-instrumentalist Shane Leonard and engineer Brian Joseph at Joseph’s famed Hive Studio. All involved have described the experience as something quite remarkable and Sean is eager to release the finished work later this year.

Over the course of his career, Sean Rowe has recorded five full-length albums and several EPs. His music has been used widely throughout film and television, with notable examples including NBC’s hit dramas The Blacklist and Parenthood. Rowe’s song “To Leave Something Behind” was one of two non-score tracks to be featured in Ben Affleck’s hit 2016 feature film, The Accountant. The song accompanied the film’s final scene and has since received nearly 4.5 million streams on Spotify alone. He tours nearly nonstop and later this year, he’ll return to Europe for two weeks with stops in the U.K., Netherlands, Sweden, Norway, and Germany.

For more information, including updates on the album, Can I Eat This?, and tour dates, please visit www.seanrowe.net. To learn how you can receive exclusive access to demos, videos, and a spot on the guest list when Sean comes to your town, please visit www.patreon.com/seanrowe. 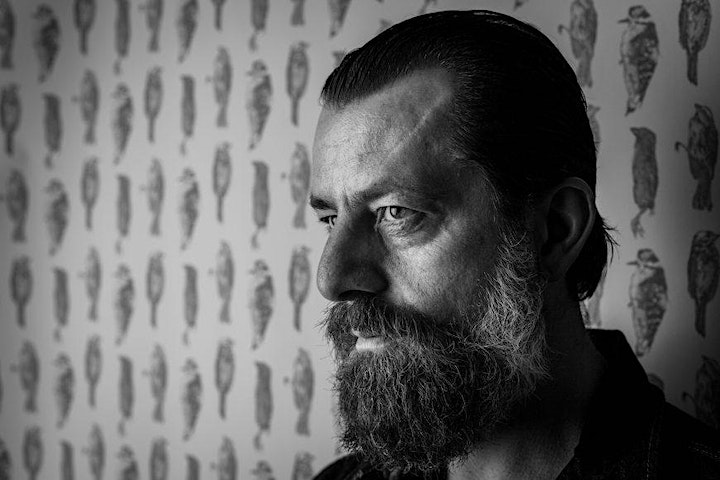